It's apparently the going thing right now, this whole "gettin' the band back together" bit. From The Police to the (Smashing) Pumpkins, James to the Jesus & Mary Chain, the old are new again, and only a small percentage of reunionees seem to be doing it for reasons other than the fact that their core audience is more upwardly mobile now than they were back in the heyday. Of course, it's one thing to tour and play the summer festivals with a catalog of old favorites and entirely another to actually record new material, the sheer act of which drives ridiculously meteoric expectations destined for a fiery crash in the used bin. This is what makes Dinosaur Jr.'s Beyond such a remarkable achievement. It's a recording reunion roughly nineteen years in the making, but somehow makes good on the promise of the band's original line-up (J. Mascis, Lou Barlow, and "Murph"). And then some. In fact, one who didn't know any better would be hard-pressed to claim that songs like "Crumble," and "Been There All the Time," aren't vintage Dinosaur Jr. recordings as they feature Mascis' trademark world-weary delivery amongst an amalgam of gloriously fuzzed-out pop. Undoubtedly, the trio-- in particular the traditionally warring Mascis and Barlow-- have benefited both from touring since originally reforming a couple of years ago, and world views that are undoubtedly more nuanced and relaxed than they were in 1989. Beyond dropped last week on the Fat Possum label, while the band begins an extensive North American tour later this week beginning on the west coast. 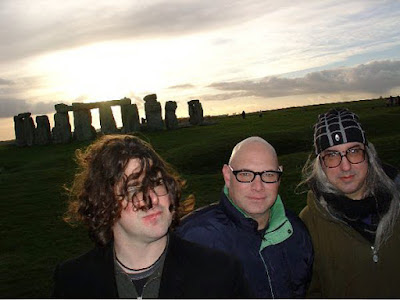 In House #1864.
Airdate: 5/7/07
Focus: New release from Dinosaur Jr., Beyond, plus new music from The Comas, Menomena, Modest Mouse, Buffalo Tom, and more.

BONUS MP3s-
Dinosaur Jr., from Beyond: